Cairo University President Mohamed Al-Khosht: Reform Of Religious Discourse Is Not Enough, We Need To Revive Religion Itself


President of Cairo University Mohamed Al-Khosht called for a “completely new religious discourse,” saying that “reformed discourse” was not enough and calling the notion of reform in Islamic thought “like renovating an old and crumbling building.” All the attempts at reform, from the days of Muhammad Abduh “have yielded disappointing results,” said Al-Khosht, pointing out that “if those reforms had borne fruit, our reality would have changed” and saying that “we should approach the Quran and the Sunna directly, armed with modern sciences.” Al-Khosht was speaking in an Al-Arabiya interview, which aired on February 4.

Click here to view this clip on MEMRI TV

Narrator: “Dr. Al-Khosht calls to move on from the era of religious stagnation, which, he believes, has lasted too long. He opposes the notion of reform in Islamic thought, because, he contends, it is like renovating an old and crumbling building.”

Host: “You are calling for more than just reform. How would you define reform?” 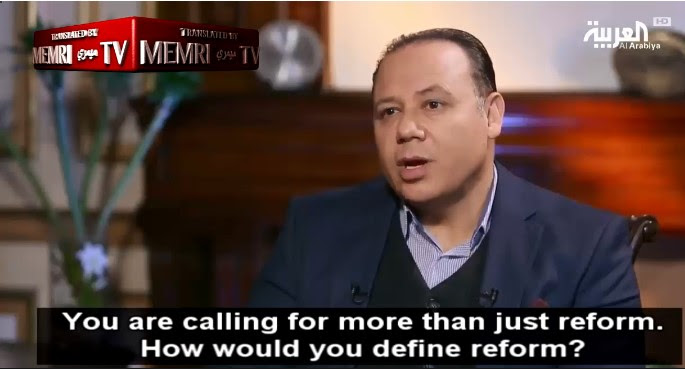 Mohamed Al-Khosht: “All the attempts at reform have yielded disappointing results.”

Mohamed Al-Khosht: “Yes. That’s how it was presented…”

Host: “Since the days of Muhammad Abduh, or even before?”

Mohamed Al-Khosht: “All of them. I judge things according to their results. If those reforms had borne fruit, our reality would have changed. But you can see what our reality is. Therefore, none of the reform attempts were any good.”

Host: “You say ‘attempts.’ What Muhammad Abduh, Tahtawi, and others did were mere attempts?”

Mohamed Al-Khosht: “These were welcome efforts.”

Host: “But they were insufficient?”

“This is why we need new sciences, and completely new religious discourse, not just ‘reformed discourse.’

“We should approach the Quran and the Sunna directly, armed with modern sciences.”

Host: “Forty percent of our people are illiterate and cannot read or write, yet you expect them to cleanse the system of jurisprudence?”

Mohamed Al-Khosht: “There is no need. Sir, faith is a simple thing, whereas the faith presented to us by [the clerics] is complicated. The faith conveyed to us by our Lord is simple.”

Voice of the voiceless

‘N’ for Nazarene — the Remnants of Iraq’s Assyrian Community