Three Coptic-owned houses in the village of al-Dawwar in the West Delta province of Beheira, some 150km northwest Cairo, were attacked by a Muslim mob on the evening of Wednesday 17 January. The houses, in which an extended family lives, were targeted with stones and Molotov bombs; the glass of the houses was smashed and two shops were damaged.

The residents were able to put off the fires that resulted from the Molotov cocktails thrown on their rooftops.

The police hastened to the scene, surrounded the Copts’ houses, dispersed the rioters, and caught two Copts and several Muslims. (..)

The Copts attacked claimed that their homes were assaulted because a member of their family, 55-year-old blacksmith Awad Zaky, demanded of a Muslim man to pay him money he owed him for a task done. But the Muslim villagers alleged it was an honour issue: that Zaky had engaged in an illicit affair with a Muslim woman from the village. Even though Islam allows liaisons between Muslim men and non-Muslim women, it bans relations between non-Muslim men and Muslim women.

Investigations ‘proved’ that the allegations against Zaky were correct; the Muslim woman’s mother-in-law, who lives in the same house, testified against her and Zaky.

The following day, a conciliation session was held at the premises of the Mayor and under the auspices of the village elders. It passed a ruling that Zaky should be banished for good from the village, and that he should be fined EGP50,000 plus a cow that would be slaughtered to seal the agreement. Both sides of the dispute should drop all charges against each other and sign an official conciliation document before the prosecution. 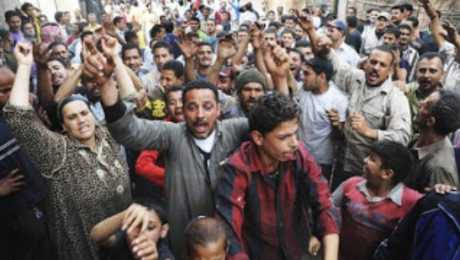 Zaky has a wife but no children.

The conciliation, however, did not abet Muslim anger; a wrathful mob attempted again to assault the three Coptic houses on Friday 19 January following Muslim noon prayers, but the police quickly stood up to them and regained calm.

Coptic public opinion is livid at the incident and its outcome on two counts: the collective punishment inflicted on innocent Copts because of wrongdoing by a member of their community; and the prevalence of traditional conciliation sessions over the rule of law. Coptic MP Nadia Henry told Watani: “If a Copt does wrong, he should be brought to justice according to the law, not by methods outside the legal system, such as conciliation sessions which—under the pretext of favoring social peace—are notorious for their injustice to Copts.

“We demand the rule of law,” MP Henry said.

The Spread of Anti-Christian Hatred in Egypt