An Egyptian aircraft carrying the body remains of 21 Christians who had been beheaded by Daesh in the coastal town of Sirte, Libya, in February 2015, has landed in Cairo Airport. Pope Tawadros II was on hand to receive them home; he was accompanied by Anba Pavnotius, Bishop of Samalout and a number of bishops and high-ranking State officials. The bodies, which were identified through DNA testing, were placed in 21 coffins, each carrying an engraving of the name of the man whose body it holds. The Pope welcomed them home with prayers of thanksgiving and joyous chants of the Resurrection.

The coffins will be taken to the village of al-Our in Samalout, Minya, some 250km south of Cairo, where they will be placed in a special shrine prepared for them.

The Coptic Church had declared the 21 Christians martyrs of faith, since they had laid down their lives for their faith. By order of President Abdel-Fattah al-Sisi, a church was built in their honour in the village of al-Our which was home to 13 of the martyrs. The church was named by President Sisi: “Church of the Martyrs of Faith and the Nation”. It houses a shrine to host their remains.

The 21 martyrs, 20 Copts and one Ghanaian, had been working as labourers in Libya. They Egyptians were captured by Daesh, also known as Islamic State (IS), some time by yearend 2014 or early 2015 as they attempted to leave the country and return home. Gruesome video footage was broadcast by Daesh on 15 February 2015, showing the 21 Christian men lined up in orange jumpsuits on a beach in Sirte where they were beheaded. The footage sent shock waves in Egypt and around the world. Egypt retaliated the following day with a succession of airstrikes against Daesh targets in Sirte.

In September 2017, the Libyan public prosecutor announced that the burial site of the beheaded men had been located, on information yielded by the cameraman who had videotaped the beheading, and who was caught by the Libyan authorities. Complicated procedures followed, including DNA testing, to identify the bodies and ship them back to Egypt.

The date 15 February is now marked by the Coptic Church as the Feast of Modern-day Martyrs. It was first celebrated this year at the church of the Martyrs of Faith and the Nation at al-Our, with a large congregation filling the church. The shrine included photographs of the martyrs, but their families said they waited for the days when their bodies would be brought home to be housed in the shrine. 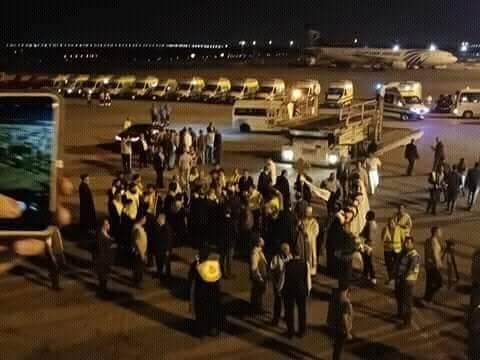 It is expected that the coffins would be taken to al-Our tomorrow to be laid in their final resting place.

Libya Gunmen Separated Muslim Workers from Christians, Handcuffed the Christians and Drove Away with Them